"To stand at the edge of the sea, to sense the ebb and flow of the tides, to feel the breath of a mist moving over a great salt marsh, to watch the flight of shore birds that have swept up and down the surf lines of the continents for untold thousands of years, to see the running of the old eels and the young shad to the sea, is to have knowledge of things that are as nearly eternal as any earthly life can be."

(Rachel Carson, The Sea Around Us) 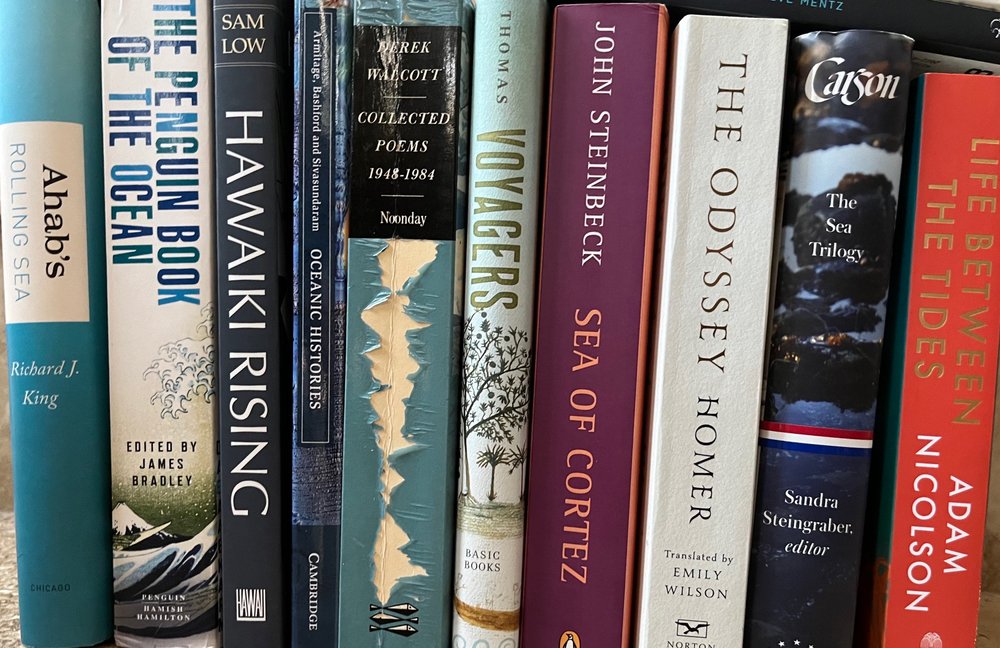 1. The Odyssey by HOMER (c.700BCE, translated by Emily Wilson, 2018) – one of the foundational texts of Western, indeed World culture; the original voyaging narrative, sweeping across the ancient Mediterranean, in an acclaimed new translation: “Our ship sailed out beyond the stream of Ocean, / across the waves of open sea …”

2.   The Sea by JULES MICHELET (La Mer, 1861, translated by Katia Sainson, 2012) – an astonishing mix of 19th century natural history, history, travel writing and imagining, arguing passionately for the life, the beauty and the rights of the sea and the creatures that inhabit it; co-written with Athénaïs, Michelet’s wife, though without credit to her: “Between the silent land and the mute tribes of the sea, the Ocean carries on the great, loud, serious and sympathetic dialogue—the harmonic concordance of the great I with itself, the beautiful debate that is none other than Love.”

3.   Sea of Cortez by JOHN STEINBECK & EDWARD F. RICKETTS (1941) – a writer and a marine biologist journey by boat through the Gulf of California, exploring the many ecologies of sea and shore: “Below the Mexican border the water changes color; it takes on a deep ultramarine blue—a washtub bluing blue, intense and seeming to penetrate deep into the water …”

4.   The Sea Around Us by RACHEL CARSON (1951) – the bestseller that made the name of the woman who, a decade later, would write Silent Spring: the essential biography of the sea by a brilliant writer who tacks effortlessly between oceanography, meteorology, biology, history and sheer poetry.

5.   “The Schooner Flight” by DEREK WALCOTT, in his The Star-Apple Kingdom (1979), reprinted in his Collected Poems 1948-1984 (1986) – the Noble Prize winning laureate of Santa Lucia wrote numerous sea poems of great beauty, including Omeros, an epic reimagining of The Odyssey told from the point of view of Caribbean fishermen. “The Schooner Flight” immerses the reader in his world of island, sea and the legacy of colonial history: “… and the soft-scissored foam / as the deck turns white and the moon open / a cloud like a door, and the light over me / is a road in white moonlight taking me home. / Shabine sang to you from the depths of the sea.”

6.  The Hungry Tide by AMITAV GHOSH (2005) – a novel set in the sea-threatened Sundarbans, tiny islands in the Bay of Bengal. A meeting of East and West, an American-educated marine biologist and an illiterate fisherman; of rare dolphins, a fragile environment and a background of political oppression.

7.  The Penguin Book of the Ocean, edited by James Bradley (2010) – a rich anthology of short passages from dozens of writers who have evoked the sea, including Wallace Stevens, Samuel Taylor Coleridge, Elizabeth Bishop, Joseph Conrad, Henry David Thoreau, Charles Darwin, Ernest Hemingway and many more.

8.   Hawaiki Rising by SAM LOW (2013) – the true story of Nainoa Thompson and the voyage of the Hōkūleʻa, recreating ancient Polynesian navigation techniques across the sea-paths of the Pacific.

9.   Oceanic Histories, edited by David Armitage, Alison Bashford & Sujit Sivasundaram (2018) – a collection of essays introducing readers to the “oceanic turn” in the writing of global history, navigating historical encounters across all the major oceans and seas of the world.

10.  Ahab’s Rolling Sea: A Natural History of Moby-Dick by RICHARD J. KING (2019) – a journey through the natural and human history of the greatest of all seafaring novels, ranging from whale intelligence to barnacles, albatrosses, sharks and climate refugees.

11.  Ocean by STEVE MENTZ (2020) – a brief but wide-ranging exemplification of Blue Humanities thinking by one of its pioneers, embracing literature, history and cultural theory.

12.  Voyagers: The Settlement of the Pacific (2021) by NICHOLAS THOMAS – a lucid and fascinating history of the peopling of the Pacific and its myriad islands, from prehistory to colonialism and beyond.

13.  Life Between the Tides: In Search of Rockpools and other Adventures along the Shore by ADAM NICOLSON (2022) – a lyrical exploration of the wonders of sandhoppers, crabs, winkles and other tiny creatures animating the intertidal zone.

’Tis not too late to seek a newer world.

Push off, and sitting well in order smite

The sounding furrows; for my purpose holds

To sail beyond the sunset, and the baths

Of all the western stars, until I die.

It may be that the gulfs will wash us down:

It may be we shall touch the Happy Isles,

And see the great Achilles, whom we knew.

Tho’ much is taken, much abides; and tho’

We are not now that strength which in old days

Moved earth and heaven, that which we are, we are;

One equal temper of heroic hearts,

Made weak by time and fate, but strong in will

To strive, to seek, to find, and not to yield."